Although tree planting is not the first thing that comes to mind when talking about technology, at Land Life Company, tech is one of our core methods to restoring land and planting at scale. Because our objective is to serve mother nature, tech is one facet of a much more complex methodology. Technology without local knowledge and human input can be misleading when facing the wrath of the natural world. We want to tell a little story where this point has been underlined with a thick permanent marker, proving that a multi-faceted approach to reforestation is entirely needed.

Our projects always marry tech and local input to get the best results. This is our ethos and way of working, but back in 2018, this way of working proved essential. A large number of trees were planted in rows in Sal del Rey in an effort to restore a large area of land there. Part of this plot was used in an experiment to map the effectiveness of sapling protection and the resulting survival rate, which we were researching with the University of Texas Rio Grande Valley (UTRGV). With this in mind, trees were planted in three different ways. The first set was planted with Land Life Company’s Cocoon, the second was planted in tubes and the third was a control group with no protection.

The trees were monitored, but in 2019 when the survival rates were being evaluated, it seemed that the trees planted with tubes were doing significantly worse than the other two groups, even the control group with no protection. Using Land Life Company’s in-house app which we developed to monitor trees on the ground, data was collected measuring the survival rate of the three groups. This data showed a significantly lower survival rate in the trees planted in tubes. Our team initially concluded that the tubes the trees were planted in could be harmful and negatively affect tree growth from this collection. If there had not been a team on the ground with local knowledge, this could very easily have been the verdict drawn.

(This graph shows that the trees in plastic tubes (tubex) had the highest mortality rate.) 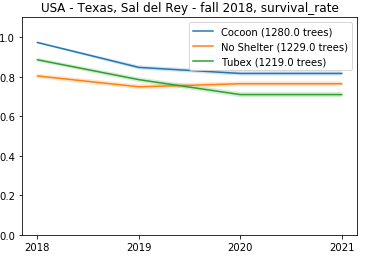 However, when this consensus was verbalized to local Land Life partner Kim from the US Fish and Wildlife Service (FWS), another picture came to light. The trees with the lowest survival rate were planted on the outer edges. As the plantings had been done in rows, the outer layer of trees had the plastic tube for protection. She told us that there had been hogs in the area and as there are forested areas next to the planting site, the damage done to these outer trees was most likely from them. In this region, it is typical behavior from hogs to burrow grubs and insects and in doing that, uproot and damage seedlings. In the design of the experiment, we made sure to have tubes in different parts of the plot to give representative data, so we decided to see what would happen if we would exclude the outer row from the analysis. As predicted by Kim, this found a statistically relevant correlation between the tree distance from the outer limits of the planting and the death rate, meaning it wasn’t the tubes killing the trees; it was the hogs. This shows that although technology is an incredibly important part of what we do and how we do it,  without the in-depth analysis and local knowledge, our data set could have been entirely different.

(The map below shows all trees that we monitored as dots, with the colors representing whether they’re alive at the last time we were there. The blue polygon shows the area that was used to run the analysis the second time, not taking into account the edges that had many dead trees.)

This story concludes that although a data-driven approach is vital to scaling up reforestation projects, local knowledge is equally as essential to ensuring that there is a more nuanced perspective, demonstrating why we will always see the value in both